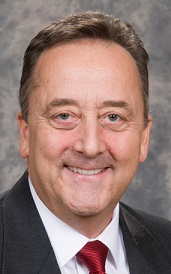 When Tim Ogle retires from his post as executive director of the Arizona School Boards Association later this year, he’ll mark the end of an eight-year term that included a high-profile school funding lawsuit and the growing prominence of public education in political discussions.

The association is looking for his successor, who will take the helm as the group handles an ongoing capital funding lawsuit and continues to fight to prove the importance of public schools.

What’s the next step for you?

Yet to be determined, but obviously I love the profession. I want to continue to be helpful, but it’s time for me to go climb a different mountain. I’ve been here eight years. It’s been a wonderful run. This is a tremendous organization, and I’m very proud of the accomplishments of this team. When we get to January, we’ll figure out the next adventure for Tim.

How is the world of school boards different now than it was when you started eight years ago?

Obviously boards are elected officials, and as much as we try to stay out of politics and remain apolitical because ultimately we’re all about member enhancement, as much as we try to maintain that core principle, we sometimes get distracted from staying true to our center. That’s a challenge for the association. It’s a big, complicated state, and we are so proud that we represent every school district. There’s a big difference between what happens in Mohave County and what happens in Maricopa County and their needs. As an association, we really work on staying true to our core.

Do you think the approach to education at the Capitol has changed much during your years at the association? Does it seem like you’re being heard more?

I think we are. I do think that ASBA has been able to really amp up its footprint in the last eight years. We’re really proud of that. We’ve done that in a variety of ways. One would be the ability for us to use data and communications to tell the story of our members and tell the story of our profession. We think that’s been really helpful to build consensus. We also have developed wonderful partnerships with AASBO (Arizona Association of School Business Officials) and ASA (Arizona School Administrators) to kind of unify the mission of public schools. We’re really proud of that also. Perhaps our progress is in measured steps, but we really believe that we are changing the culture, and that ultimately is the success we’re after: changing the culture of support for children and building a backbone for a better Arizona. That’s why we’re doing this. We just fundamentally believe that public schools are the cornerstone of democracy and a free society and the absolute best delivery of education for children is at the intersection of strong leadership and local governance. If we remain true to that, I don’t think that any political force can deny that that’s the sweet spot to help Arizona get better.

Your tenure started as ASBA was the plaintiff in a major lawsuit. Was the resolution to that in Proposition 123 everything it could have been?

There were a couple of really marks in time during my tenure, of course. One was we were the lead plaintiff in the inflation lawsuit, and we were able to come up with a resolution that became Proposition 123. We worked with the Governor’s Office to get that over the finish line and really secured inflation protection for our members in perpetuity. That’s obviously a major accomplishment in the past few years. Now, we’re at the precipice of the capital litigation for which we’re also a plaintiff, and we’re really looking forward to that starting to matriculate through the court system in 2020. Clearly the facts of the case are in favor of the plaintiffs, and as we approach the 2020 legislative session obviously state policymakers are going to have to deal with us because we’re headed probably for the court system in ‘20.

Can you tell me a little more about that litigation?

A group of plaintiffs joined forces to file a legal challenge that the state of Arizona has not honored the Supreme Court commitments made in Roosevelt v Bishop to provide equitable facilities and capital opportunities for all schools and all children. As you see the big state, you recognize the disparities in opportunity in capital funding. This is truly gross, and so we have filed litigation to help resolve that. It’s a very unfair system, and the School Facilities Board has been underfunded since ‘09 and unable to resolve their own challenges because of a lack of support from state policymakers.

During the past couple years, it seems like education has moved more to the forefront at the Capitol. We saw the Red for Ed movement and the 20 by 2020 plan. What was ASBA’s involvement in all of that?

Well, obviously Red for Ed was just a gigantic positive turn of events for schools, and it got the attention of virtually every citizen in our state. You couldn’t not know about it, and we needed that. Our members are districts and districts are employers. So we love our teachers and we support their work at our very soul, but ultimately they’re our employees. We weren’t in the forefront of Red for Ed but we were participating on the sidelines.

What are some of the areas where the state still has to improve when it comes to public education?

We need to continue to work on changing the culture so that there is a common recognition that K-12 public schools are the quickest most efficient path to economic development and building a bigger, broader backbone for our great state. It’s an investment in infrastructure, in human capital. It is not an expense. And dollars spent on children pay huge dividends for future generations. When we can get the common belief out there, I think that’s the point at which you’ll say, “Wow. We’re changing. We’re moving on.”