Becoming a Board Member

What Issues Do Arizonans Say They Care Most About?

If you answered D, give yourself a star. The answer is education.

Polls of Arizonans, From Likely Voters to Business Leaders 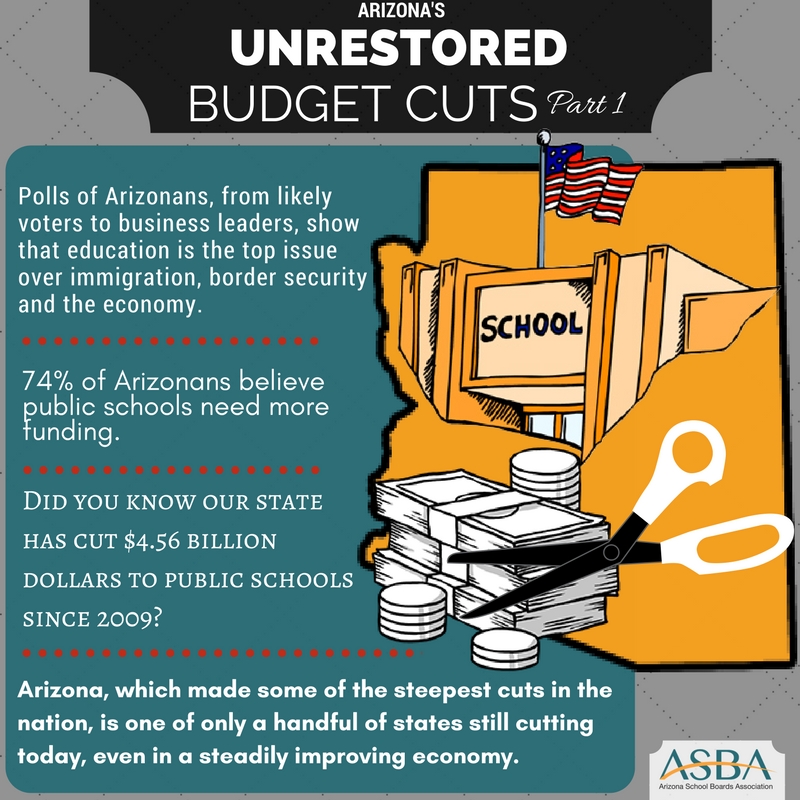 Results from a statewide survey of likely Arizona voters show that education is the top issue for Arizonans over immigration, border security and the economy. And Arizonans don’t just care about education – they want the state to invest in it! Results from a voter exit poll conducted in May 2016 say 74 percent of Arizonans believe public schools need more funding.

Unfortunately, Too Many Arizona Legislators Haven’t Done Well on This Test.

In fact, instead of prioritizing public education for funding, steep cuts have been made to our public schools since 2009. It’s true that many states now provide less support per student than before the Great Recession. With fewer revenues coming in, tough choices had to be made. But Arizona, which made some of the steepest cuts in the nation, is one of only a handful of states still cutting today, even in a steadily improving economy. Did you know our state has cut $4.56 billion dollars to public schools since 2009? And those cuts haven’t been restored.

Let’s Look at What’s Been De-Funded. 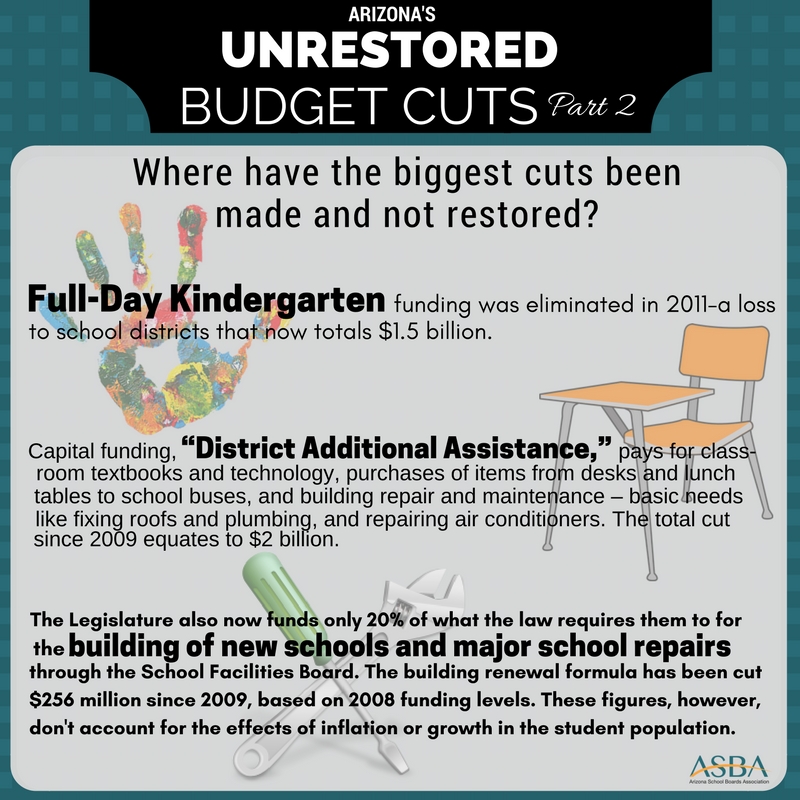 But Where Have the Biggest Cuts Been Made and Not Restored?

In areas that impact students significantly, daily and directly. Full-Day Kindergarten funding was eliminated in 2011 – a loss to school districts that now totals $1.5 billion dollars that now must be found somewhere else in shrunken school budgets if our youngest students are to benefit from this basic foundation of learning. Capital funding, what the state calls “District Additional Assistance,” is the funding category that pays for classroom textbooks and technology, purchases of items from desks and lunch tables to school buses, and building repair and maintenance – basic needs like fixing roofs and plumbing, and repairing air conditioners. The total cut since 2009 equates to $2 billion. Besides its cuts to school district capital budget, the Legislature also now funds only 20 percent of what the law requires them to for the building of new schools and major school repairs through the School Facilities Board. largely left to school districts whose voters pass a bond election. It is difficult to estimate how much districts have spent to build the new schools the SFB did not fund, but the building renewal formula has been cut $256 million since 2009, based on 2008 funding levels.

Add It All up and the De-Funding of Our Public Schools Totals $4.56 Billion.

These figures, however, don’t account for the effects of inflation or growth in the student population. And while the dollars are gone, the needs and services these funding sources paid for continue to exist.

Of Course, Dollars and Cents Aren’t the Only Way to Look at the Cost of These Cuts. Here’s Another Way to Understand De-Funding:

Remember that during this same period expectations for student and teacher success and performance were ramped up, with more rigorous academic standards, a new statewide assessment and teachers’ evaluations tied to student test scores.

These Cuts Weaken Schools’ Capacity to Develop the Intelligence and Creativity of the Next Generation of Leaders. 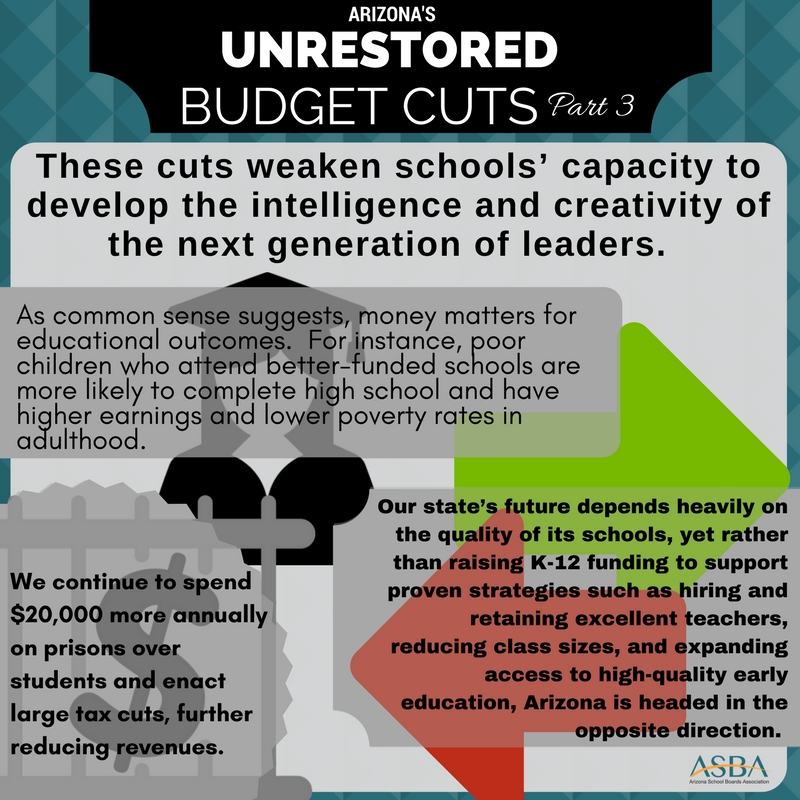 As common sense suggests, money matters for educational outcomes. For instance, poor children who attend better-funded schools are more likely to complete high school and have higher earnings and lower poverty rates in adulthood. Our state’s future depends heavily on the quality of its schools, yet rather than raising K-12 funding to support proven strategies such as hiring and retaining excellent teachers, reducing class sizes, and expanding access to high-quality early education, Arizona is headed in the opposite direction.

These Types of Decisions Made by the Legislature Are the Reason We Continue to Rank Among the Lowest States in K-12 Funding.

Arizonans want more. It’s time for our public schools and the more than 1.1 million students they nurture and serve every day to receive the state investment needed to rebuild the foundation that has been steadily cut from beneath them. Contact your elected officials today.

ASBA’s Job Search Website
Check it out now to build your profile. First time AppliTrack users will need to complete a one-time profile.

Be Training Prepared
Your district must be an active or associate member to request a training. Please visit our ASBA Membership page for more information.